That’s right, Microsoft does not understand Twitter. Today they launched a page (update – page has been deleted) where viewers of the President’s State of the Union Address can keep track of their favorite topics such as gun control, unemployment, and climate change in real time, displaying whether recent social media posts about those topics tend to be positive or negative.

STARTING NOW: Watch and react to the #SOTU in real-time with #BingPolitics: http://t.co/tFUzDhMt 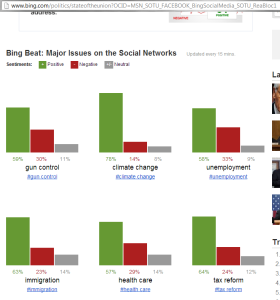 To keep track of each topic, they appear to have assigned a Twitter hashtag to each topic. The only problem is, half the hashtags are  two words. Hashtags can’t be two words in Twitter… An honest mistake I suppose. But what’s even stranger, is that when you click on these hashtags which appear to be links, it brings you to a page where you can update your twitter status with the message, “your topic #SOTU (link to page)”. It doesn’t even attempt to use the hashtags they set up for it, just the #SOTU one.

Admittedly, the #SOTU hashtag makes perfect sense and is displayed correctly, but the question is, why would anyone want to share this tweet??? It doesn’t even link to the specific topic they had mentioned, just the one page where all of those topics are listed. Just saying, “tax reform” at the beginning doesn’t really make any sense.

I would call this one a Microsoft fail.