If you are like me, you have spent many frustrating hours working with Photoshop and the pen tool trying to figure out the same thing. How can you get rid of, delete, or otherwise remove the Bezier Handles attached to an anchor point? 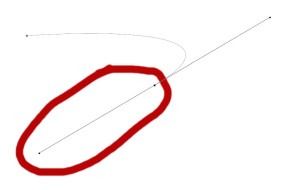 WHY WON’T YOU DIE

First, some background. Maybe you aren’t sure what a bezier handle is. A bezier handle is the little “wing” that comes off any anchor point created with the pen tool that creates the curve in a line. If you drag it out further, the curve becomes greater. It is created by clicking and dragging with the pen tool to create a new point. If you click without dragging, you end up with a point with no handles at all, and thus no curve is created as a result of this anchor point.

But what if you want just one bezier handle, not two? This might be useful if you need a curve on one side of the point and not the other. If you were smart enough to figure out that they are even called bezier handles, you probably Googled your way across the internet, coming across tutorials telling you that to remove them, you simply alt + click and they will go away. This is not accurate. Alt + clicking merely allows you to modify one of the handles independently of the other. A useful tip, to be sure, but it does not accomplish what we need.

So how DO you delete the bezier handle? Sadly, as of Photoshop CS5, the answer is: you can’t. Every anchor point created with the pen tool has either 0 or 2 handles on it (for the most part: read on.)

But have no fear; there is a workaround!  With the anchor point selected and the pen tool active, alt + click the bezier point and drag it to the very center of its corresponding anchor point. While this doesn’t technically delete the point and handle, it in effect renders it useless, which is almost as good. Zoom in as much as you can to get it directly in the center of its anchor point, and you will be dealing with a tiny fraction of a pixel in terms of the effect on the curve, which for all intents and purposes is good enough. If you are a perfectionist, there is nothing I can do for you.

There is also a way to partially avoid this situation altogether.  If you click and don’t drag to place a new anchor point, and then hold down alt and click on the new anchor point and drag out from it, you now have an anchor point with only one handle. It seems as though you have no control over which handle it is, it always controls the future side, not the existing line between this point and the previous one. It’s  not ideal but it works!

Hopefully this helps some people… I found myself shocked at the lack of information out there about this and hope to help someone out. Unfortunately my CS6 beta expired so I can’t test this in the newer version of Photoshop, perhaps they fixed it. As far as I know, Illustrator actually allows you to DELETE the bezier point using the same method I described, but that functionality is not in Photoshop as far as I know.